Happy New Year! Wishing all my readers (all five of you!) a wonderfully prosperous 2010!

So I’m at least ten days behind on my trip log. My excuse is that I’ve been sick and haven’t been in a very writing frame of mind. Right now we’re at Schipol Airport in Amsterdam waiting for our flight to London Heathrow. We’ve spent about a week in Amsterdam, some days shuttling among family and some days on our own. This trip to London is our long-awaited honeymoon (married May 2002!), so we’re on our own! But, backing up to the Italian leg: 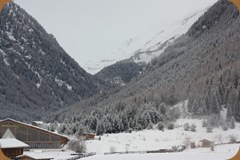 The day before Christmas Eve, we drove about fifteen minutes to get to the small village of Brixon/Bressalone. It’s got a beautiful little shopping area, plus they were having their Christmas Market. The roads were okay on the way there. We’d had a lot of snow the previous days but they really know how to take care of the roads up in the mountains, so we didn’t have any problems getting to Brixon. It was dark when we left though, so things were a bit slippery and slick.

If you’d imagine a little Italian shopping village in the mountains, you would probably be pretty close to imagining Brixon, with the homes and businesses built along the rise 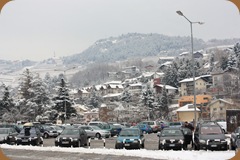 of the mountain. The narrow streets are a little stressful from an American perspective (everyone’s glad I wasn’t the one driving!), but the drivers are overall very accommodating and, I think, much more friendly than the average American driver. There were a number of tour busses in the village when we were there and I was amazed at how well the drivers managed the curves and hills!

As I mentioned, Brixon has a nice shopping district with cobblestone streets and ivy covered walls. It’s very hard not to imagine 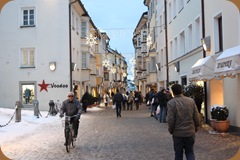 being in a postcard while walking past the shops. The whole town was lit up for the holidays and it had a magical quality.

As far as shopping, I was looking for a nice pair of Italian boots. I expected they wouldn’t be cheap and I found a range of 140 to 250 Euros. Still, very expensive, but what really kept me from getting a pair was the fact that apparently Italian women have very small feet! I couldn’t find any boots I liked to fit my size 9.5US feet! So the Italian boots were a bust, much to the relief of my wallet!

At the heart of the shopping district, Brixon was having its Christmas Market. Many wooden stalls were built there, many housing hand-made Christmas trinkets. Some had generic China-made tourist souvenirs, as well, of course. And at each corner was a stall selling espresso, tea and other warm drinks. Coffee, particularly espresso, is an absolute staple in Europe. I really have no idea how it can be an after dinner drink, because it would keep me up half the night! Anyway, though we didn’t buy anything at the Christmas Market, it was really fun to stroll through. Some of the hand-made work was truly beautiful! Check out a few photos:

We only spent a few more days in Italy, so one more post on that, then we move on to Amsterdam!

One quick update on current events: We did make it to London and I have to say, I’m really impressed with the Underground here. It’s incredibly easy to get around! I really wish Atlanta had a system like this.