So we only spent a few more days in Valles, but we were there for Christmas Eve and Christmas Day, as well, which was very nice. It snowed again the night before 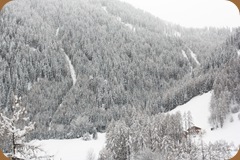 Christmas Eve and then it was snowy and rainy on Christmas Day. Though it was breathtaking to see some of the vistas, it was very, very cold. And since I’d been sick since the day we arrived in Italy (and am still sick, writing this in London!), I’d been trying very hard not to go out for long periods of time. But the photo ops were irresistible!

And now, something funny. I believe I mentioned that people in that area speak both Italian and German. Now, in high school I took Latin and Spanish. In college I took French and about seven years 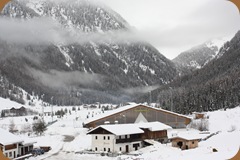 ago I took a few Italian classes. So all my foreign language skills are in the Romance Languages. I’m not fluent in any of them, but my mouth, throat and voice box understand how to make the sounds required, including the rolling “r” and the lilting accent at the ends of words. But German… that’s a language that’s always eluded me. Truth be told, I never had much interest in learning it. But because my in-laws are all Dutch and the two languages are relatively close in sounds, they all speak German (rather than Italian). At any rate, I was trying my hand – or, rather, mouth – at German now and again. So I went to order some hot tea, which is what I was drinking for almost my entire stay there. And in German, hot tea is “heisse thee” which is pronounced very, very similarly to the English “iced tea.” I’m sure you can see where I’m going with this. So I (thought I) ordered heisse thee in German. I was pretty proud of myself for getting over my fear of looking stupid because I couldn’t speak German. I’m sure you can imagine my chagrin when what came to me was a small glass with cold, cold tea. I resolved to have learned Italian semi-fluently by the time I return. No more German for me!

So we did presents for the kids on Christmas Eve night and on Christmas Eve day everyone tried to take advantage of the last full day we’d be there, by getting out on the slopes. It was cold and rainy all day, though, so by lunchtime everyone was in the warm hotel bar. While we were ordering lunch, we noticed a helicopter in the parking lot across the little street. Over the next hour or so, we saw emergency vehicles bring 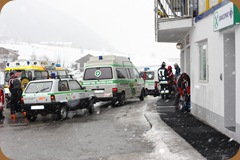 volunteers from all around. There’d been an avalanche on the backside of the mountain. We didn’t learn details til later, but watched the helicopter disappear to the other side with rescue workers and return at least half a dozen times. At least two trips included dogs. It was really amazing to watch everyone mobilize in order to search and rescue, if necessary. We recognized that many of the emergency vehicles that arrived were from neighboring villages. The way the communities bind together in order to deal with an emergency is awe-inspiring.

Later, we spoke to one of the ski instructors who was part of the rescue effort and he told us that initially, there had been a set of ski poles found near the site of the avalanche, so everyone mobilized as if there were people trapped, though they found out relatively quickly that the poles had just been accidentally left behind and that no one had been in danger. I was very relieved to have heard this, because I couldn’t imagine how terrible it would have been to have learned that a loved one or friend had been trapped in that avalanche on Christmas Day.

The next morning, Carlita and Anita (half of the family team that runs the hotel) made sure we had a good breakfast as well as sandwiches for lunch on the road, then saw us off with hugs and kisses. Everyone at the hotel was so welcoming and friendly. Anita and one of the waitresses, Sabina, had a little bit of English and I helped them learn a little more while they encouraged me with German (not that it did much good, obviously! 😉 ). I really felt as if I were visiting family, not just staying at some hotel in the mountains.

I’d love to organize a writing retreat up there during summertime. Anyone want to go to the Italian Alps and write?

On our way back, we passed some pretty sites. A few photos: 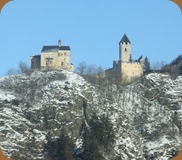 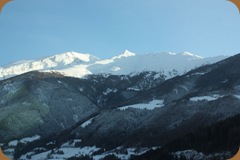 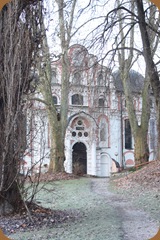 We found this little church down a pathway from a small parking area (a rest stop without facilities) on the side of the highway. It’s a functioning church, with services and events like any other church.