I’m sitting in the bar of the hotel we’re staying at in the Italian Alps. It’s almost lunchtime and skiers are clomping through with their big, plastic ski boots. We’ve been here a couple days now, but this is the first time I’ve had a chance to sit and write some things up. I’m going to try to give some highlights of my trip so far. And hopefully the pics will upload properly. Internet here is 2 Euros per hour, so you can imagine I’m not connecting all that often! 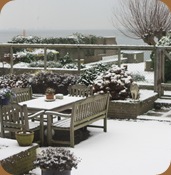 We arrived in Amsterdam at about 11:30am local time on 17 December. The flight itself was good, but we were surrounded by children and they really got into the tag-team screaming (I’m sure there’s a story in there somewhere about the secret screaming-child conspiracy). There was snow on the ground when we landed in Amsterdam! For those of us from the US, snow isn’t often a  big deal, but snow is rare in Amsterdam, especially in December. So when we went to the house we’ll be staying at here, all the school kids were outside throwing snowballs and building snowmen.

The next morning, we left with my mother in law and brother in law. We drove about  seven hours and stayed overnight in a small town in Germany. Along the way, we stopped at rest areas where you had to pay 50 Euro cents to use the bathroom. You got a ticket and could take it to the counter and use the ticket as credit for a purchase. I thought this was an interesting way to ensure people bought things at the rest area. And because it was all the same system, you can use the bathroom in one area and use the tickets as credit in another rest area. Very interesting! Though I have to say, for those who complain that Starbucks coffee is expensive, you should try the espresso in Germany! It’s wonderful, but at these rest areas, a single espresso, which would cost $1.80 at Starbucks is 2,85 Euro, which comes out to be about $4US. Talk about expensive coffee! 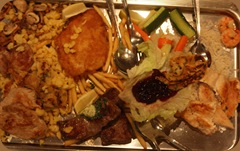 So we go to the little hotel in Germany, called Salzburger Hof, and settled in for the evening. We had dinner in the restaurant on-site and the food was fantastic! We got this family style mixed grill that had weinerschnitzel, chicken, pork, spaetzle, shrimp, french fries and veggies. It was pretty awesome. I really have to admit that the Germans know how to make great food! 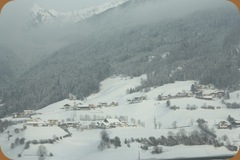 It got down to -15 Celsius overnight and it snowed. Freaking cold! So we got back on the road for the last leg of the trip to Italy, which should have been about three hours. It turned into five hours instead. We were driving in temps between –7 and –11*C and the windshield wiper fluid froze in the tubes. You wouldn’t think this would be an issue unless you’ve had the experience of driving in the snow in freezing temperatures. The dirty sludge thrown up from the road stuck to the windows – froze 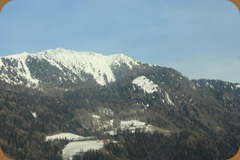 solid whenever we’d run the wipers. So it was smeared along the windshield, leaving a grey grime for us to try to see through. Of course, we had anti-freeze in the wiper fluid, but it was only for temps as low as –20*C. We ended up buying –60*C and finally got the ice broken up in the tubes at around 1pm. After that, we were able to get back up to speed. We passed a lot of little towns nestled in the foothills of the Alps and even got some photos of small castles and strongholds. Some of the views were absolutely spectacular!

We arrived at the hotel in Valles, Italy at about 3pm local time. More photos to come! 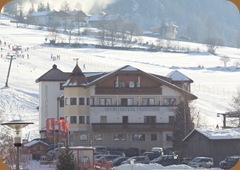