Of course, the day we arrived in Italy, I got sick. Everyone around me had been sick for two months at least and I managed to keep the germies from getting me. Until we hit Italy. So I’m sick during my vacation. How sucky is that? But I’m trying to persevere!

It was snowy here in Val/Valles when we arrived. The hotel is situated in a little valley surrounded

by mountains. We have a room with the equivalent of a king size bed, a big bathroom  complete with bidet, and a balcony which overlooks the rest of the valley and the ski lift across the creek. The views here are spectacular. It’s difficult to wrap my mind around the fact that the view out my front window looks like a painting on a wall. I can remember when my husband (before we were married) had gone to see the Grand Canyon and said he couldn’t be 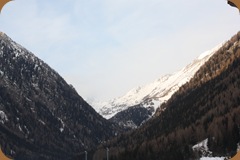 impressed with it because it was too big to wrap his mind around. I thought that was silly at the time, but I have a better idea of what he meant now. I mean, how can you  fully appreciate a view like this? It’s almost beyond comprehension. And I find it amazing that people actually live here and this is their normal day-to-day life, seeing these views whenever they look out their windows.

There’s several hotels, little restaurants and a couple bars. The other day, we went 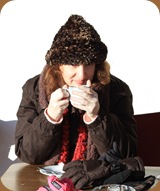 across the creek, got some hot chocolate at one of the restaurants, then took the ski lift up to the top of one of the mountains. I’m not a skier, so I’ve never even been to any sort of ski facility. I assumed that we’d take the lift up and we’d see the top of the mountain, along with the ski slope that goes down to the valley where our hotel is. Wrong! We got to the top of the mountain and there were ski slopes everywhere! I don’t know why it didn’t occur to me that they’d utilize the entire mountain for skiing. What a dope, right? But there were half a dozen ski slopes up there, in all different directions. I know there was some sort of organization to it, but I couldn’t make it out.

Also at the top of the mountain was a little restaurant where those of us who weren’t skiing hung out. Something interesting about this area of the country: it was part of

Germany until about World War I, and everyone here speaks both German and Italian. So the restaurant menus are in both languages. I’ve taken some Italian as well as other romance languages, so I can make out a lot of the written stuff. But German is definitely predominant here.

Yesterday, we drove about fifteen minutes to a small village called Brixen/Bressanone (German/Italian) where we went shopping. They’ve got a great little shopping area and they were having their winter market with lots of little stalls where people sell holiday trinkets, some hand made, some made in China 😉 More photos of that trip next!