Wooo! I did it! I won NaNoWriMo! Yeah, it took me the weekend to recouperate enough to write this post, but there it is! Lol (Okay, in truth, my mom in law is also in town, so that’s my excuse!)

For those who don’t know, National Novel Writing Month happens every November and it is a personal challenge to write 50,000 words (usually on a novel, not always) in 30 days. Kinda crazy, yeah. But a lot of fun and incredibly productive.

It’s not always easy. It means writing an average of 1667 words each day. That may sound daunting, but it isn’t. Not really. Sit down with a 15 minute timer and write. Don’t allow yourself to stop for more than 5 seconds at a time. Don’t sit, staring at the screen, thinking about what you’re going to write. Actually write. For fifteen full minutes. Then count your words.

So it’s not the number of words that’s the challenge. It’s the consistency of doing it every day.

And then there are the non NaNoWriMo events

In addition to NaNoWriMo and the usual Thanksgiving holiday, I also had an out of state wedding in the first part of November. And when I got home, my mother in law came over from Europe for a visit. We picked her up at the airport 4 days after we got back into town and she was here… Well, she’s still here. 😉

Since I knew I was going to have a lot of distractions this year, I front-loaded my writing. I wrote at least 2500 words almost every day for the first week. Don’t get me wrong. I was still behind by day 20, but I wasn’t nearly as behind as I would have been.

Scrivener for Windows (of course!)

Writing sprints with my Tribe (if you haven’t joined The Writing Tribe, why not?)

What I worked on

I was a bit of a rebel this year and did two different projects. First, I did a short story (about 11k words) that will be a bridge between Jivaja and Book 2 (which is, as yet, title-less). And then, I wrote the remaining words on Book 2. So that is more than halfway done!

The short story is already with my beta readers and once I figure out the title of that, I’ll have a cover. I’m looking to release it in January. But if you’ve read Jivaja (or plan to read Jivaja) and want a free copy, drop your email address in this form and I’ll let you know when it’s available! It’s my little way of saying 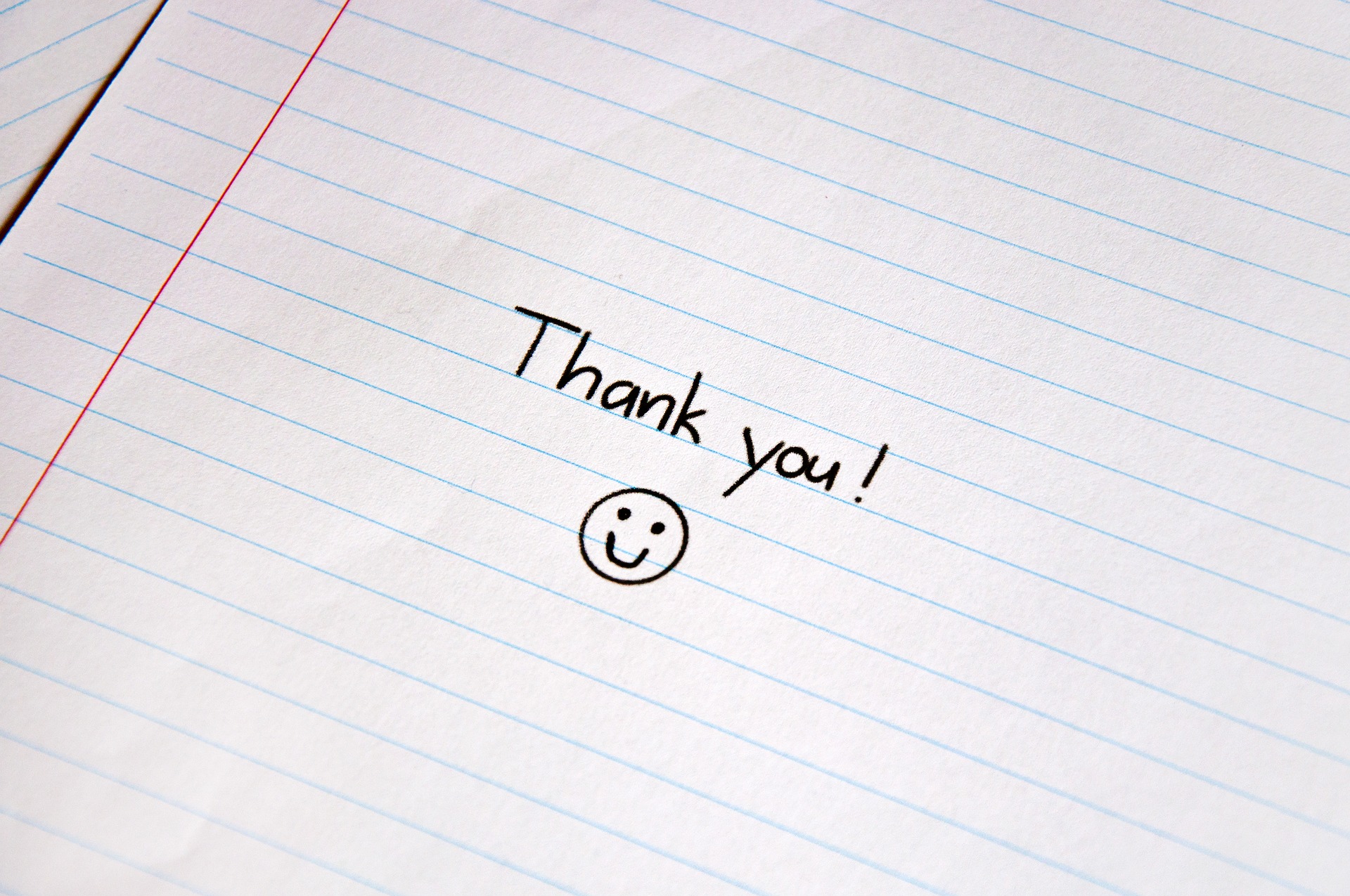 As a note, it isn’t a stand-alone story. You will definitely want to have read Jivaja first. 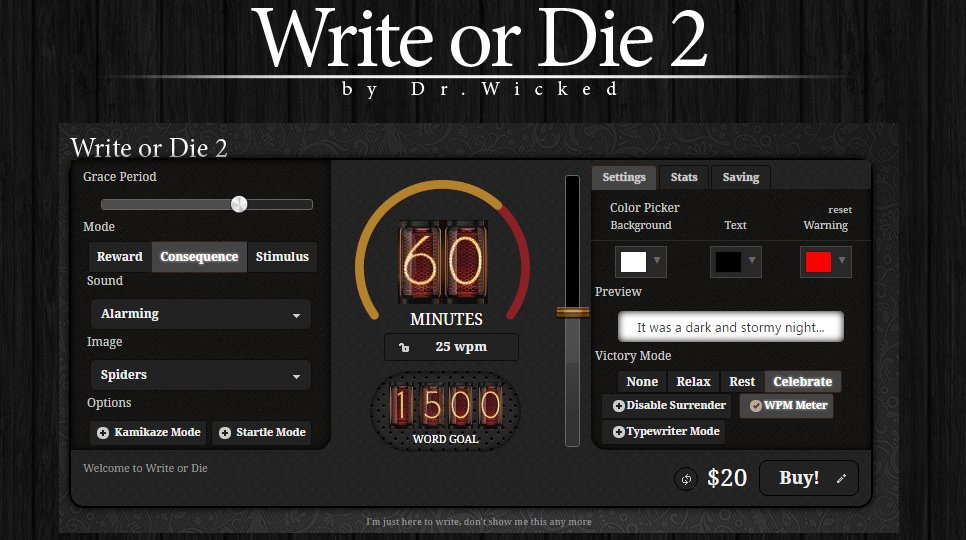 Every other Tuesday, we talk about the different tools available for writers to make life easier (theoretically 😉 ).

What this writing tool does: In short, it makes you write.

Write or Die is one of the writing tools that’s been in my box for a long time. I’ve been using the paid version since v1; and v2 has added some bells and whistles that I don’t really use much, but the strength of this tool is that it encourages you (very strongly, if you set it up that way) to stop lollygagging and actually get words down on the page. How does it do this? Well…

There are a lot of options for how it encourages you to write, which makes it really customizable as far as writing tools go. But the general gist is this: you tell it how long you want to write and what your word count goal is for that session. Then you tell it what consequences you want if you’re not writing. Version 2.0 also adds 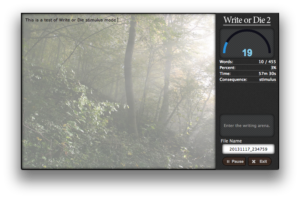 rewards for accomplishing your goal. I don’t use the rewards too much — which are mainly adding nice photos to your writing page or playing good sounds or music. I find these to be a distraction, so I don’t use them, but I am sure a lot of people love it. That’s what makes this a great writing tool. There’s something for everyone!

I respond better to consequences when it comes to keeping my fingers moving on the page and here there are a couple different options. You can go with Startle mode, which begins when you stop typing. You get a short grace period (which you set) and then your screen turns pink. It gets systematically darker over the seconds you continue to not-write, until it becomes bright red. At that point, the program starts making the most obnoxious noises. All this continues until you start typing again.

Kamikaze mode, which, of course, you can set (or not!) used to eat y

our words when you stopped typing. But Dr. Wicked has made a change there too. Now it just disemvowels your words. Yep. It removes all the vowels from your words. How’s that for freaky?

There are a lot of other little bells and whistles, like custom playlists and persistent writing stats to keep up with your productivity. It also tracks average words per minute, all time highs and lots of other stuff. It’s a really great little writing tool!

I definitely wouldn’t get through National Novel Writing Month without it! It’s also useful in one of the steps I outline in my post Get More Writing Time: Find It in the Margins that went up yesterday, as a matter of fact!

Where to get it: Write or Die 2

Do you use Write or Die? Let me know in the comments!

Do you have a writing tool that you absolutely can’t live without? Drop a line to me down below and tell me about it! 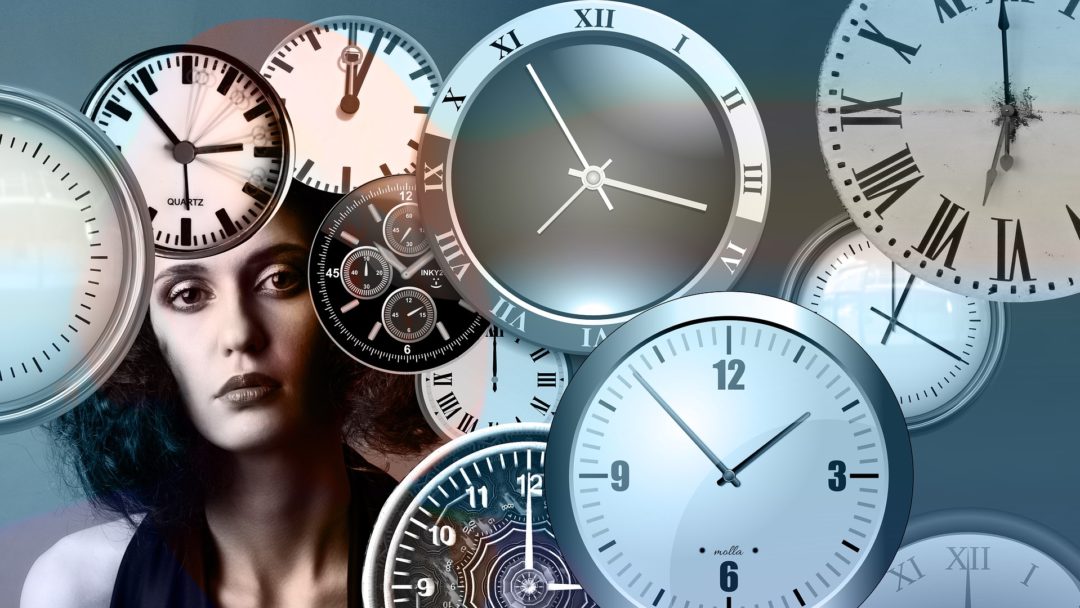 What I’m Listening To: Paper Gods by Duran Duran — because, yknow Duran Duran

Something Cool: The new Broadchurch season starts next week! Squeee!

One of the most common things I hear from writers about why they’re not writing is that there isn’t enough time. We’re all so busy these days with professional, family, and social commitments. It’s understandable that sometimes there doesn’t seem to be enough time to write. So let’s talk about how we can write more with the time we have.

If you’re anything like I was, you feel like you need a certain amount of time that is dedicated to writing in order to get anything accomplished. I’d suggest that this is the first thing that needs to be addressed in getting writing done. And here’s how we’re going to do it!

Figure out how much writing you can do in 15 minutes

You can time yourself with a digital or analog timer, but I recommend using Write or Die 2, either the free version which can be used on the web, or the paid version, which can live on your desktop. WoD2 is better than a traditional timer, because it encourages you not to dawdle, not to sit and stare at the screen for the limited amount of time you have to write. It keeps you writing. 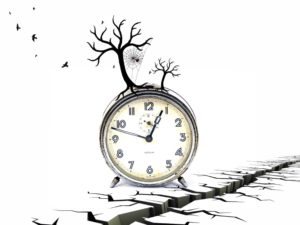 Set the timer for 15 minutes and get going. No pausing to ponder your next word. Just write. Once the time expires, see how many words you’ve gotten down. You might be surprised. I discovered that I can easily write 400 words in 15 minutes. I can write 500 words if I’m really in the zone, but usually 400 is my average. That shocked me when I discovered it! I’d always thought myself a slow writer. But, apparently, I was wrong.

Do a little planning ahead

Plotters won’t have a problem with this, but pantsers might. If you’re a “write by the seat of your pants” type, the idea of outlining might make you nauseated. Luckily, I’m not asking you to do that 🙂

Even those who are pantsers usually have some idea of what’s going to happen in the next scene, likely in the next couple scenes. Keep a 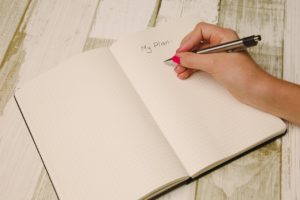 single document where you just jot down a few words about what’s going to happen next. I’d suggest adding to it after each scene you complete. Just note a sentence or two — nothing more detailed than you want to write — about the main point or plot point of the next scene. This is especially important if you’re done with your writing for the day.

Create a mobile system for your writing

So often, we’re stuck in a doctor’s office or God forbid, at the DMV. We’re all rushrushrush and then w…a…i…t. So work out a way to access information about your story from your phone or tablet. Keep your work on Dropbox or another cloud service. At the very least, keep the list we just talked about — your “Next Scene” list — in this place, so you can get to it via your mobile device.

Pull it all together

You’re pretty smart; you’ve probably already figured this out by now. Or at least have an idea of what I’m about to say.

Professional writers — the ones who live off their writing — got there because they didn’t let a little thing like not having enough time keep them from writing. You shouldn’t either.

With the things we’ve put in place, you can write anywhere, with anything. Even if you only have your phone. If you’re waiting for an appointment, you can pull out your phone, look at your “Next Scene” list, open a new document and write. Or pull out a small notebook.

If you’re driving, instead, you can open a voice recorder on your phone 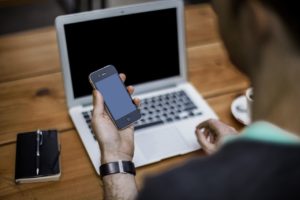 and record the story. When you have 20 minutes before the kids come home from school, you can open the “Next Scene” list, then start writing. And if you know that you can get 300 words in 15 minutes, you know you can write a page right then.

Are these ideal? Of course not. But they’re doable. Workable. And that’s what we’re looking for. A way to get stuff done, even if the situation isn’t ideal.

Our lives are very busy, but we also have a lot of margin — time in between obligations that is often wasted because we’re waiting for someone or something. You can use this time for yourself, to further your goals as an author. And if you can manage to squeeze just 15 minutes of writing in a day, you’ll be doing awesome! Remember:

One page per day = one novel at the end of the year.

That year is going to go by anyway. If you can find 15 minutes in the margins of each day, you’ll reach your goal. You can do it!

Do you have writing hacks that give you more time to write? Drop a note in the comments and share with your fellow writers!